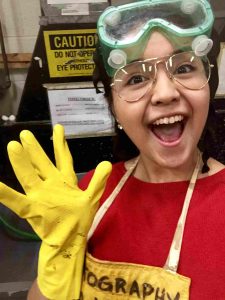 Hi folks! My name’s Aida; I’m an international student from Venezuela and I’m also a 4th year Film Production Student. Today, I’ll talk about Film Processing and Development and why I chose to go through this process for my thesis film.

First things first: I want to go out with a BANG! So I spent a lot of time coming up with a story for my short film that would make me feel proud and happy. My short film is titled “Hysteria, the Young Artist” and it tells the story of a young girl named Hysteria who loves to draw but her father isn’t very encouraging of her passion. In the short, Hysteria meets a dark entity called Friend who gives her all the love and support she was lacking, making her feel happy and safe—but why?

I’m making this short as part of my Alternative Workshop course in which we learn different and unconventional ways of storytelling. Thanks to this course, I have become really interested in Film (specifically 16mm Film) after being introduced to it for the first time in my first year; back then, I thought I wouldn’t have to worry or memorize anything because I wouldn’t use Film ever again… I was wrong! I’m really excited to be working with Film again because it makes my short even more special after processing and developing everything myself. I could’ve easily sent it to a lab to do it for me, but this short is my baby and I wanted to do everything with my bare hands. 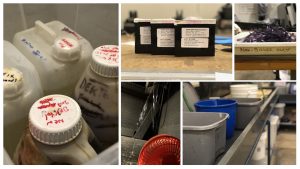 I won’t go into details about this process, because that’s something you can easily find on google, but let’s say that the first step was pouring the chemicals into separate bins. Before taking the Film out of its box, I would turn off the lights so I wouldn’t ruin it and then I would soak it in the Developer first and the Fixer second. In between each bin I placed a bucket with clean water so I wouldn’t mix the chemicals in the process. My favourite part is when I can turn on the lights at the end when the Film is in the last bucket with clean water. This means that the film is ready and I can finally see some completed images! It’s very exciting and nerve wracking because I don’t know what I’ll see, and I just hope for the best. Once the film is ready I would hang it outside, right next to the dark room, and leave it there for a while to dry before putting it back into a small reel and the box it came in. 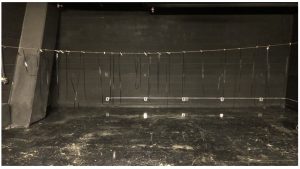 For my short, I processed and developed about 550 feet of Film, which is approximately 15 minutes of watching time. Some of my friends have asked me: why did I choose to shoot part of my short on Film instead of shooting everything in digital?  My answer to that is because it fits the feeling of the story. Half of my short was shot in digital and the other half in Film; the Film half is in black and white Film to represent Hysteria’s obstacles and anxiety since it was only used to shoot the scenes with her father. I’m not only telling a story through scenes and actors; I’m telling a story through the format of the short as well. I want the audience to have a different experience when watching my short than they normally would, and that’s why I decided to play around with the entire arsenal available to me as a filmmaker.

Now, those 550 feet were divided into six small rolls of film. I could have left them there but my Alt professor, Phillip Hoffman, said it would be easier to put them all together in one big film reel for when I’d have to digitize them, so that’s what I did. Thanks to the help of Marcos Arriaga, an employee from the equipment room, I attached the end of each roll to another one until I had a single big film reel in my hands.

A week later, I met with my Director of Photography to digitize my Film. Digitizing is the process of recording the images of my Film roll into a digital camera so that I can edit them later on using an editing software (which is, of course, the convenience of living in a technological era). The process doesn’t take long, but it’ll ultimately depend on how much footage you have. 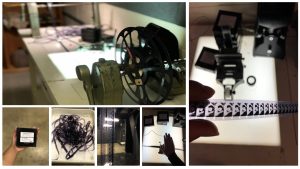 While I was there, sitting in the darkroom and watching the images of my Film through the projector, I was getting very emotional. “I did that,” I thought, “I remember what instructions I gave to the actors in that scene, I directed this whole thing—I did that!”  I love making films, and watching the footage always makes me emotional because, when I was 14 and I decided I wanted to study Film Production, I had no idea what I was doing! Now, 7 years later, I’m about to graduate in doing what I love.  I always believe that you should have fun in doing what you love, find new ways to express your ideas, and keep following your dreams, no matter what.  It’s what brought me here, and I couldn’t be happier!